The summer of 2013 can be remembered in my mind as being a 'proper summer'! I painted this on the 'hottest day of the year' (according to the radio) not knowing that there were many more 'hottest days of the year' to follow! I think everyone in England at the time felt they should 'enjoy it while it lasts' not knowing that the heatwave would go on and on, to give us our best summer in recent memory.

July saw me heading down to Cornwall with my paints and a car full of easels and frames and lashings of ginger beer (possibly). My first stop was Mousehole and I stayed in the most wonderful studio you could imagine, just a short walk from the harbour and perfect in every way. My dream home!

I fell in love with Mousehole harbour and didn't really want to leave and paint anywhere else, but I did sneak a look at beautiful Sennen Cove too.

My next stop was pretty Portscatho on the Roseland peninsula, during a heatwave! I only had a couple of days here and a lot of inspiration and work to do.


At the end of July I was in London for a hectic few days at the SAA's event at the Business Design Centre, and I had another article published in The Artist magazine. This one was about painting alla prima in oils. 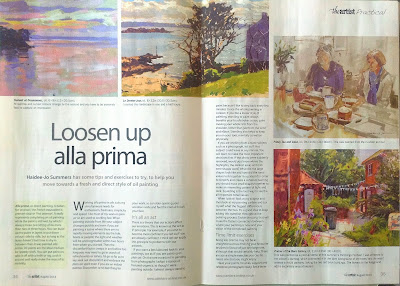 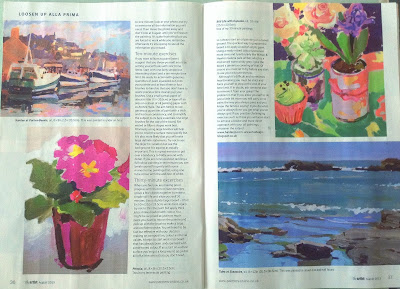 August was the time for painting and relaxing and yes, more sunshine! I spent the whole month on the island of Bréhat in France with my family and we had the pleasure of Lori Putnam's company so it was super to have a painting companion as I'm usually there painting on my own.


I've painted on Guerzido beach lots of times but this has to be one of the busiest! In August all the holiday houses on the island are full and day visitors come across in their thousands from the mainland.


August was such a great month for painting on the island, and I gained much inspiration in Paimpol harbour on the mainland too with a series of watercolour and felt tip studies of my beloved red sails. In between the painting sessions there was plenty of time for relaxing, although I even painted at the neighbourhood party!

I was also sketching away, taking part in 'drawing August' on twitter. It was a fun event and lovely to have the time for it. Here are a few of my sketches from the month -

After a brilliant long summer it was back home and back to school for the children, and back to workshops and writing for me. However I still had an exciting event to look forward to! In September I was invited up to the beautiful town of Staithes on the North Yorkshire coast. Staithes has a famous history as an artists colony here in the UK. The group of painters based here in the 19th century included Laura and Harold Knight. I have a real fondness for Laura Knight for her dedication to plein air painting, her passion and perseverance, and being able to make it in what truly was a man's world. Dame Laura Knight was the first woman to be honoured with a retrospective exhibition at the Royal Academy in 1965.  Here's an interesting snippet for you - Laura was a member of Nottingham Society of Artists as an art student in the 1890's before leaving for Staithes, as was I in the 1990's.

I was staying with family and friends in Whitby and painting in Staithes in the daytime with members of the Royal Society of Marine Artists. It was a terrific few days with great company.

Thanks for bearing with me this far on my trip down memory lane! In tomorrow's post I'll review the last three months of the year which will bring us right up to date, and then I'll start to think about what 2014 may hold... in the meantime I'd like to wish you all a very very happy new year!

Thank you for your words!